During the last semester, I have been trying to recycle as much as I can. However, the closest recycling center in walking distance is at the school which doesn't have a bin for everything. In Ireland, you can find somewhere to recycle and stores take it upon themselves to preserve resources.

When we visited Cork, I went to the store and asked for a bag for my items. The cashier told me it would be 20 cents for a plastic bag, a negative incentive. Also when we visit Waterford Insititute of Technology, they have bins for both composites and plastics. This showed that Ireland is very serious about making a greener environment.

As a result, I would like to see if my hometown can invest in a small recycling center to protect our community. I see this as a volunteer opportunity for everyone and we will be making a contribution to our city.
Posted by Tatseyana's Blog at 3:44 PM No comments:

Be Open to Everyone

Before traveling to Ireland, I didn't know that Irish groups were fighting for civil rights in the 60s like African Americans. It wasn't until I visited the Peace Wall and the EPIC Museum where I realized many countries have experienced cruel injustice. Ireland has gone through the Time of Troubles, issues with church and state, and fights for civil rights. I didn't learn this until I educated myself in the country.

I should have been had this knowledge on the island, but it is never too late to learn. Now that I know this happened in Ireland, I will make it my duty to stay informed on countries experiencing hard times. We all share this Earth and we should all fight together to make it a good place to live.
Posted by Tatseyana's Blog at 3:14 PM 2 comments:

We are four days into this Ireland study abroad trip and I have witnessed one of the most powerful things, the Peace Wall in Belfast. In history class, I was always intrigued by photos of protests for civil rights, protests against war, and protests against big businesses. I admired their courage even because they would fight regardless of whether it directly affected them. On Wednesday, I saw protest embodied in the form of art in Belfast.

On the wall, you could see drawings combating social injustice and the exercise of freedom of speech. There were paintings on both Irish issues and worldwide issues. One picture included a quote that was inspiring, "Peace is more difficult than war. We were not scared as we resisted; we will not be scared when we make peace. This quote alone made me question my position in the fight of social injustice. Another touching thing was seeing a vibrant mural of African American leaders.

I was in awe seeing a picture honoring more than several blacks. I didn't think people outside of the U.S. shared our pain of racial and social injustice. To my surprise, Irish people used our movement to fight for rights. That day, I was proud to be black. 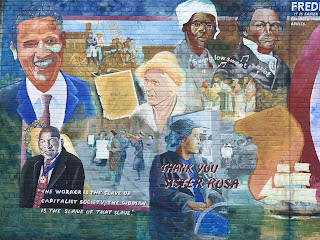 Posted by Tatseyana's Blog at 3:07 PM No comments:

Finally, I have made my way to VMware in Cork and received some insight into their role in the IT industry here in Ireland. This company manages data for local hospitals and other organization then store it into their cloud. VMware guarantees that their customers' data is protected and take precautions to prevent any hacking attacks with the help of professionals. I asked a few questions to get familiar with the company. 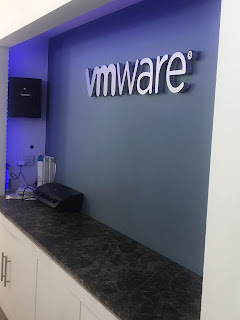 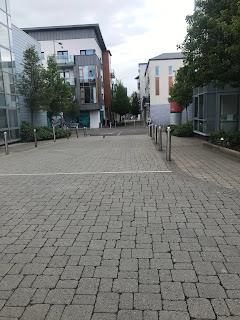 VMware offers a few cloud computing models including Software as a Service(SaaS) and Platform as a Service(PaaS). After asking about a question regarding a comparison between VMware and Oracle, I learned that the company uses Oracle Cloud technologies which I found very cool. The speaker shared with us that VMware is constantly acquiring tech start-ups and integrating their technologies into theirs. I wish I had the chance to meet those who create the technologies, but it's okay!

Heading Down to Heineken

Today, we had the opportunity to tour Heineken Ireland Headquarters in Cork. Through a presentation, we learned about Heineken’s role in the beer industry worldwide and specifically in Ireland. Heineken currently employs over 800,000 people and own more than 170 production facilities. The beer company is known as the number one lager in Ireland and has a brewery right behind their headquarters. We were given a chance to look around. 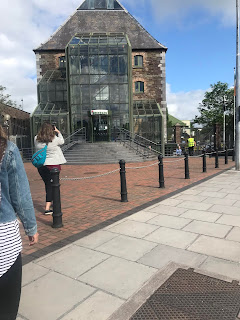 To maintain safety in the facilities, we were instructed to wear orange and yellow vests like the employees. I admired how the company emphasized on safety; using signs, they alerted people to stay in certain areas, wear proper clothing and masks, and posted sayings like "No job is so urgent or important it cannot be done safely." Our tour guide also stated that they have become eco-friendlier be reusing CO2, which is very impressive. In addition to their machinery, we got a look at some of their ingredients. 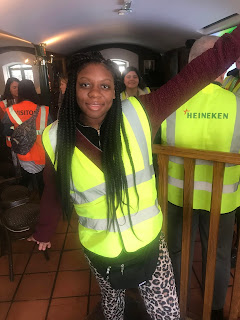 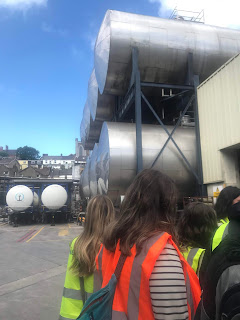 I was intrigued to see that Heineken beer shared the same ingredients as the Guinness beer, which are barley, hops, wheat, and water. Below is a picture of the amount of barley in each Heineken beer bottle. 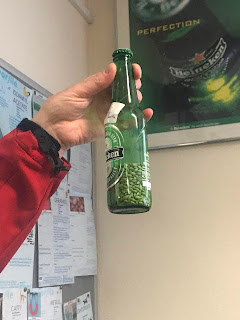 Posted by Tatseyana's Blog at 11:20 AM No comments:

Irish People Across the World

The EPIC Museum presents Irish people's history as global advocates, artists, and political leaders. You will find interactive screens that will educate you on their impact on the world. I became inspired after reading some stories on how they fought for civil rights for not only for themselves but for others too. This made me reevaluate my position in the world. 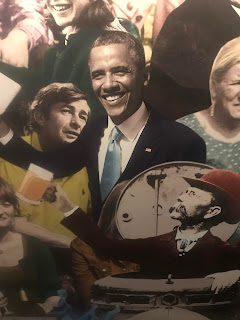 As I walked around the museum, I found that Barack Obama, Rihanna, and Mariah Carey have Irish roots. Another thing that captured my eye was an Irish woman's, Valerie Place, story. She was a volunteer in Africa that fed children. Tragically, she was killed on her way to a school. Her story reminded of the volunteer in the film, Hotel Rwanda, who was helping kids from Africa to escape war. Instead of remaining in Ireland, Valerie Place decided to help the world and as a result, made an impact on 2500 lives. 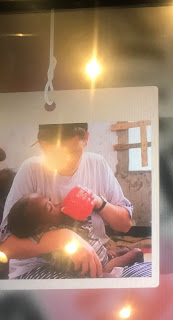 I enjoyed the EPIC Museum because it gave me insight into Irish's people contributions to the world. Though the museum is a tourist attraction, it brings in revenue as tourism is a large part of Ireland's economy. Many people travel to Ireland to analyze their roots and find their ancestors. This museum gives them a start. 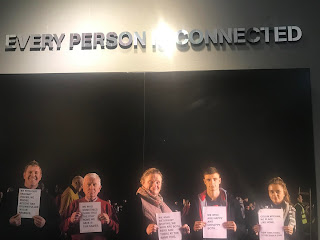 Posted by Tatseyana's Blog at 2:15 PM No comments:

Need Help? GEC Has Your Back!

What do you think of when you hear the words, "Guinness Enterprise Centre"? You would think it has relations with famous beer, but there is no correlation between the two. I thought the same until we took a visit to the organization last week. Guinness Enterprise Centre supports entrepreneurs with their business endeavors by providing them with a workspace, grants, and tools. Here is a picture of a hashtag outside of their facility. 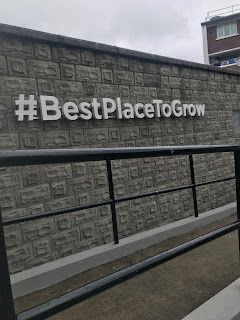 The center is in Dublin, Ireland which was our first location. We were given a tour of the facility and saw the very workspaces they provide. The rooms had desks, computers, and spaces where people can collaborate. Also, wifi is readily available in these areas. I noticed in one room that a guy was coding and remembered my coding days from last semester. The colors of the wall were very vibrant and lively which made think of the organizations' support for innovation.

During our visit, we watched two presentations. In the first one, we learned that the GEC has three governmental agencies, including IDA Ireland and Enterprise Ireland. The second one featured an entrepreneur that has been given assistance from the center. I enjoyed her presentation because her business is built on information systems that aid international students in finding the study abroad for them, along with housing. This excited me because it shows that MIS is needed everywhere! 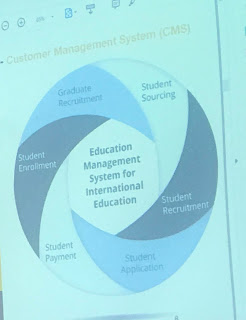 Posted by Tatseyana's Blog at 1:33 PM No comments: